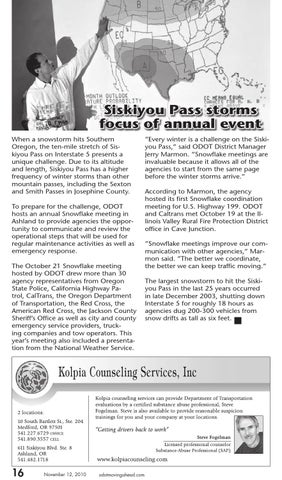 Siskiyou Pass storms focus of annual event When a snowstorm hits Southern Oregon, the ten-mile stretch of Siskiyou Pass on Interstate 5 presents a unique challenge. Due to its altitude and length, Siskiyou Pass has a higher frequency of winter storms than other mountain passes, including the Sexton and Smith Passes in Josephine County. To prepare for the challenge, ODOT hosts an annual Snowflake meeting in Ashland to provide agencies the opportunity to communicate and review the operational steps that will be used for regular maintenance activities as well as emergency response. The October 21 Snowflake meeting hosted by ODOT drew more than 30 agency representatives from Oregon State Police, California Highway Patrol, CalTrans, the Oregon Department of Transportation, the Red Cross, the American Red Cross, the Jackson County Sheriff’s Office as well as city and county emergency service providers, trucking companies and tow operators. This year’s meeting also included a presentation from the National Weather Service.

“Every winter is a challenge on the Siskiyou Pass,” said ODOT District Manager Jerry Marmon. “Snowflake meetings are invaluable because it allows all of the agencies to start from the same page before the winter storms arrive.” According to Marmon, the agency hosted its first Snowflake coordination meeting for U.S. Highway 199. ODOT and Caltrans met October 19 at the Illinois Valley Rural Fire Protection District office in Cave Junction. “Snowflake meetings improve our communication with other agencies,” Marmon said. “The better we coordinate, the better we can keep traffic moving.” The largest snowstorm to hit the Siskiyou Pass in the last 25 years occurred in late December 2003, shutting down Interstate 5 for roughly 18 hours as agencies dug 200-300 vehicles from snow drifts as tall as six feet.