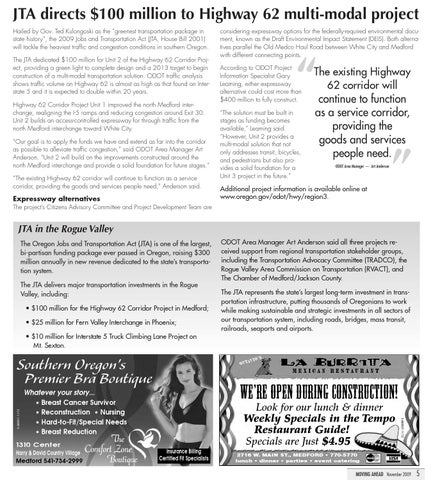 JTA directs $100 million to Highway 62 multi-modal project Hailed by Gov. Ted Kulongoski as the “greenest transportation package in state history”, the 2009 Jobs and Transportation Act (JTA, House Bill 2001) will tackle the heaviest traffic and congestion conditions in southern Oregon. The JTA dedicated $100 million for Unit 2 of the Highway 62 Corridor Project, providing a green light to complete design and a 2013 target to begin construction of a multi-modal transportation solution. ODOT traffic analysis shows traffic volume on Highway 62 is almost as high as that found on Interstate 5 and it is expected to double within 20 years. Highway 62 Corridor Project Unit 1 improved the north Medford interchange, realigning the I-5 ramps and reducing congestion around Exit 30. Unit 2 builds an access-controlled expressway for through traffic from the north Medford interchange toward White City. “Our goal is to apply the funds we have and extend as far into the corridor as possible to alleviate traffic congestion,” said ODOT Area Manager Art Anderson. “Unit 2 will build on the improvements constructed around the north Medford interchange and provide a solid foundation for future stages.” “The existing Highway 62 corridor will continue to function as a service corridor, providing the goods and services people need,” Anderson said.

According to ODOT Project Information Specialist Gary Leaming, either expressway alternative could cost more than $400 million to fully construct. “The solution must be built in stages as funding becomes available,” Leaming said. “However, Unit 2 provides a multi-modal solution that not only addresses transit, bicycles, and pedestrians but also provides a solid foundation for a Unit 3 project in the future.”

The project’s Citizens Advisory Committee and Project Development Team are

The JTA represents the state’s largest long-term investment in transportation infrastructure, putting thousands of Oregonians to work while making sustainable and strategic investments in all sectors of our transportation system, including roads, bridges, mass transit, railroads, seaports and airports.

Look for our lunch &amp; dinner Weekly Specials in the Tempo Restaurant Guide! Specials are Just $4.95