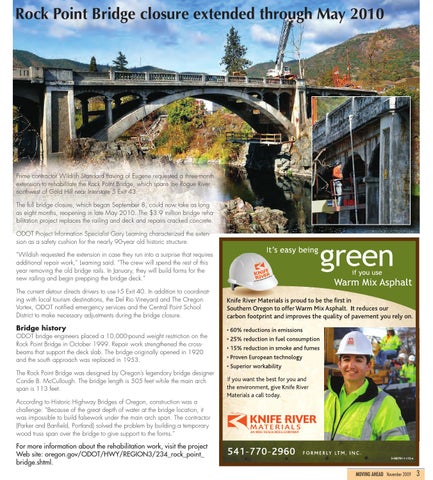 Prime contractor Wildish Standard Paving of Eugene requested a three-month extension to rehabilitate the Rock Point Bridge, which spans the Rogue River northwest of Gold Hill near Interstate 5 Exit 43. The full bridge closure, which began September 8, could now take as long as eight months, reopening in late May 2010. The $3.9 million bridge rehabilitation project replaces the railing and deck and repairs cracked concrete. ODOT Project Information Specialist Gary Leaming characterized the extension as a safety cushion for the nearly 90-year old historic structure. “Wildish requested the extension in case they run into a surprise that requires additional repair work,” Leaming said. “The crew will spend the rest of this year removing the old bridge rails. In January, they will build forms for the new railing and begin prepping the bridge deck.” The current detour directs drivers to use I-5 Exit 40. In addition to coordinating with local tourism destinations, the Del Rio Vineyard and The Oregon Vortex, ODOT notified emergency services and the Central Point School District to make necessary adjustments during the bridge closure.

Bridge history ODOT bridge engineers placed a 10,000-pound weight restriction on the Rock Point Bridge in October 1999. Repair work strengthened the crossbeams that support the deck slab. The bridge originally opened in 1920 and the south approach was replaced in 1953. The Rock Point Bridge was designed by Oregon’s legendary bridge designer Conde B. McCullough. The bridge length is 505 feet while the main arch span is 113 feet. According to Historic Highway Bridges of Oregon, construction was a challenge: “Because of the great depth of water at the bridge location, it was impossible to build falsework under the main arch span. The contractor (Parker and Banfield, Portland) solved the problem by building a temporary wood truss span over the bridge to give support to the forms.”