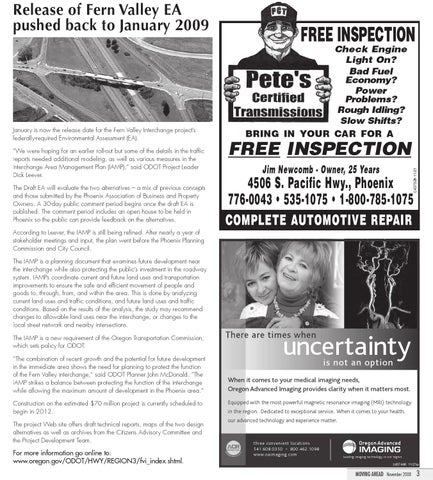 January is now the release date for the Fern Valley Interchange project’s federally-required Environmental Assessment (EA). “We were hoping for an earlier roll-out but some of the details in the trafﬁc reports needed additional modeling, as well as various measures in the Interchange Area Management Plan (IAMP),” said ODOT Project Leader Dick Leever. The Draft EA will evaluate the two alternatives – a mix of previous concepts and those submitted by the Phoenix Association of Business and Property Owners. A 30-day public comment period begins once the draft EA is published. The comment period includes an open house to be held in Phoenix so the public can provide feedback on the alternatives.

Release of Fern Valley EA pushed back to January 2009

According to Leever, the IAMP is still being reﬁned. After nearly a year of stakeholder meetings and input, the plan went before the Phoenix Planning Commission and City Council. The IAMP is a planning document that examines future development near the interchange while also protecting the public’s investment in the roadway system. IAMPs coordinate current and future land uses and transportation improvements to ensure the safe and efﬁcient movement of people and goods to, through, from, and within the area. This is done by analyzing current land uses and trafﬁc conditions, and future land uses and trafﬁc conditions. Based on the results of the analysis, the study may recommend changes to allowable land uses near the interchange, or changes to the local street network and nearby intersections. The IAMP is a new requirement of the Oregon Transportation Commission, which sets policy for ODOT. “The combination of recent growth and the potential for future development in the immediate area shows the need for planning to protect the function of the Fern Valley interchange,” said ODOT Planner John McDonald. “The IAMP strikes a balance between protecting the function of the interchange while allowing the maximum amount of development in the Phoenix area.” Construction on the estimated $70 million project is currently scheduled to begin in 2012. The project Web site offers draft technical reports, maps of the two design alternatives as well as archives from the Citizens Advisory Committee and the Project Development Team.

There are times when

uncertainty is not an option

Leading imaging technology in our region