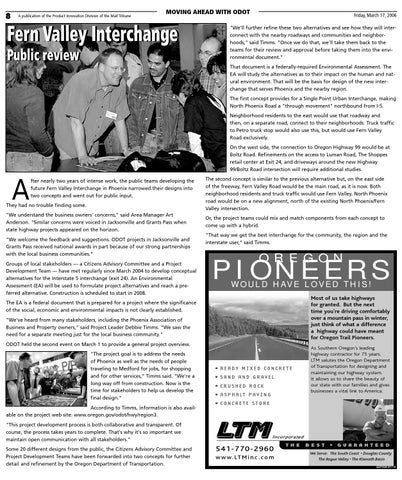 &quot;We&#39;ll further refine these two alternatives and see how they will interconnect with the nearby roadways and communities and neighborhoods,&quot; said Timms. &quot;Once we do that, we&#39;ll take them back to the teams for their review and approval before taking them into the environmental document.&quot; That document is a federally-required Environmental Assessment. The EA will study the alternatives as to their impact on the human and natural environment. That will be the basis for design of the new interchange that serves Phoenix and the nearby region. The first concept provides for a Single Point Urban Interchange, making North Phoenix Road a &quot;through movement&quot; northbound from I-5. Neighborhood residents to the east would use that roadway and then, on a separate road, connect to their neighborhoods. Truck traffic to Petro truck stop would also use this, but would use Fern Valley Road exclusively. On the west side, the connection to Oregon Highway 99 would be at Boltz Road. Refinements on the access to Luman Road, The Shoppes retail center at Exit 24, and driveways around the new Highway 99/Boltz Road intersection will require additional studies.

fter nearly two years of intense work, the public teams developing the future Fern Valley Interchange in Phoenix narrowed their designs into two concepts and went out for public input.

They had no trouble finding some. &quot;We understand the business owners&#39; concerns,&quot; said Area Manager Art Anderson. &quot;Similar concerns were voiced in Jacksonville and Grants Pass when state highway projects appeared on the horizon. &quot;We welcome the feedback and suggestions. ODOT projects in Jacksonville and Grants Pass received national awards in part because of our strong partnerships with the local business communities.&quot; Groups of local stakeholders — a Citizens Advisory Committee and a Project Development Team — have met regularly since March 2004 to develop conceptual alternatives for the Interstate 5 interchange (exit 24). An Environmental Assessment (EA) will be used to formulate project alternatives and reach a preferred alternative. Construction is scheduled to start in 2008.

The second concept is similar to the previous alternative but, on the east side of the freeway, Fern Valley Road would be the main road, as it is now. Both neighborhood residents and truck traffic would use Fern Valley. North Phoenix road would be on a new alignment, north of the existing North Phoenix/Fern Valley intersection. Or, the project teams could mix and match components from each concept to come up with a hybrid. &quot;That way we get the best interchange for the community, the region and the interstate user,&quot; said Timms.

Most of us take highways for granted. But the next time you&#39;re driving comfortably over a mountain pass in winter, just think of what a difference a highway could have meant for Oregon Trail Pioneers.

The EA is a federal document that is prepared for a project where the significance of the social, economic and environmental impacts is not clearly established. &quot;We&#39;ve heard from many stakeholders, including the Phoenix Association of Business and Property owners,&quot; said Project Leader Debbie Timms. &quot;We saw the need for a separate meeting just for the local business community.&quot; ODOT held the second event on March 1 to provide a general project overview. &quot;The project goal is to address the needs of Phoenix as well as the needs of people traveling to Medford for jobs, for shopping and for other services,&quot; Timms said. &quot;We&#39;re a long way off from construction. Now is the time for stakeholders to help us develop the final design.&quot; According to Timms, information is also available on the project web site: www.oregon.gov/odot/hwy/region3.

&quot;This project development process is both collaborative and transparent. Of course, the process takes years to complete. That&#39;s why it&#39;s so important we maintain open communication with all stakeholders.&quot; Some 20 different designs from the public, the Citizens Advisory Committee and Project Development Teams have been forwarded into two concepts for further detail and refinement by the Oregon Department of Transportation.

As Southern Oregon&#39;s leading highway contractor for 75 years, LTM salutes the Oregon Department of Transportation for designing and maintaining our highway system. It allows us to share the beauty of our state with our families and gives businesses a vital link to America.