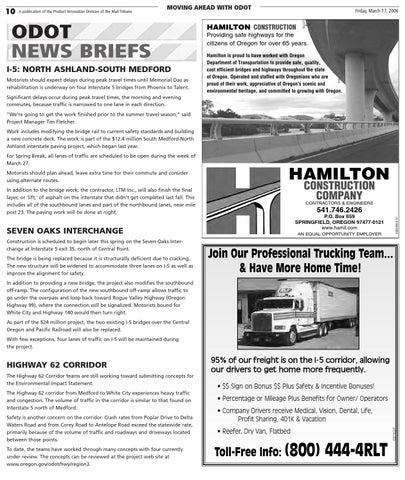 ODOT NEWS BRIEFS I-5: NORTH ASHLAND-SOUTH MEDFORD Motorists should expect delays during peak travel times until Memorial Day as rehabilitation is underway on four Interstate 5 bridges from Phoenix to Talent.

HAMILTON CONSTRUCTION Providing safe highways for the citizens of Oregon for over 65 years. Hamilton is proud to have worked with Oregon Department of Transportation to provide safe, quality, cost efficient bridges and highways throughout the state of Oregon. Operated and staffed with Oregonians who are proud of their work, appreciative of Oregon&#39;s scenic and environmental heritage, and committed to growing with Oregon.

Significant delays occur during peak travel times, the morning and evening commutes, because traffic is narrowed to one lane in each direction. &quot;We&#39;re going to get the work finished prior to the summer travel season,&quot; said Project Manager Tim Fletcher. Work includes modifying the bridge rail to current safety standards and building a new concrete deck. The work is part of the $12.4 million South Medford-North Ashland interstate paving project, which began last year. For Spring Break, all lanes of traffic are scheduled to be open during the week of March 27.

In addition to the bridge work, the contractor, LTM Inc., will also finish the final layer, or &#39;lift,&#39; of asphalt on the interstate that didn&#39;t get completed last fall. This includes all of the southbound lanes and part of the northbound lanes, near mile post 23. The paving work will be done at night.

SEVEN OAKS INTERCHANGE Construction is scheduled to begin later this spring on the Seven Oaks Interchange at Interstate 5 exit 35, north of Central Point. The bridge is being replaced because it is structurally deficient due to cracking. The new structure will be widened to accommodate three lanes on I-5 as well as improve the alignment for safety.

Motorists should plan ahead, leave extra time for their commute and consider using alternate routes.

In addition to providing a new bridge, the project also modifies the southbound off-ramp. The configuration of the new southbound off-ramp allows traffic to go under the overpass and loop back toward Rogue Valley Highway (Oregon Highway 99), where the connection will be signalized. Motorists bound for White City and Highway 140 would then turn right. As part of the $24 million project, the two existing I-5 bridges over the Central Oregon and Pacific Railroad will also be replaced. With few exceptions, four lanes of traffic on I-5 will be maintained during the project.

95% of our freight is on the I-5 corridor, allowing our drivers to get home more frequently. • $$ Sign on Bonus $$ Plus Safety &amp; Incentive Bonuses!

The Highway 62 corridor from Medford to White City experiences heavy traffic and congestion. The volume of traffic in the corridor is similar to that found on Interstate 5 north of Medford.

• Percentage or Mileage Plus Benefits for Owner/ Operators

Safety is another concern on the corridor. Crash rates from Poplar Drive to Delta Waters Road and from Corey Road to Antelope Road exceed the statewide rate, primarily because of the volume of traffic and roadways and driveways located between those points.

To date, the teams have worked through many concepts with four currently under review. The concepts can be reviewed at the project web site at www.oregon.gov/odot/hwy/region3.