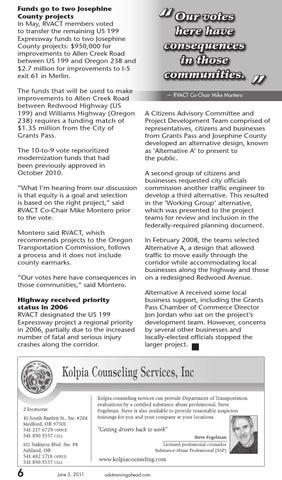 votes “ Our here have

Funds go to two Josephine County projects In May, RVACT members voted to transfer the remaining US 199 Expressway funds to two Josephine County projects: $950,000 for improvements to Allen Creek Road between US 199 and Oregon 238 and $2.7 million for improvements to I-5 exit 61 in Merlin. The funds that will be used to make improvements to Allen Creek Road between Redwood Highway (US 199) and Williams Highway (Oregon 238) requires a funding match of $1.35 million from the City of Grants Pass. The 10-to-9 vote reprioritized modernization funds that had been previously approved in October 2010. “What I’m hearing from our discussion is that equity is a goal and selection is based on the right project,” said RVACT Co-Chair Mike Montero prior to the vote. Montero said RVACT, which recommends projects to the Oregon Transportation Commission, follows a process and it does not include county earmarks. “Our votes here have consequences in those communities,” said Montero. Highway received priority status in 2006 RVACT designated the US 199 Expressway project a regional priority in 2006, partially due to the increased number of fatal and serious injury crashes along the corridor.

A Citizens Advisory Committee and Project Development Team comprised of representatives, citizens and businesses from Grants Pass and Josephine County developed an alternative design, known as ‘Alternative A’ to present to the public. A second group of citizens and businesses requested city officials commission another traffic engineer to develop a third alternative. This resulted in the ‘Working Group’ alternative, which was presented to the project teams for review and inclusion in the federally-required planning document. In February 2008, the teams selected Alternative A, a design that allowed traffic to move easily through the corridor while accommodating local businesses along the highway and those on a redesigned Redwood Avenue. Alternative A received some local business support, including the Grants Pass Chamber of Commerce Director Jon Jordan who sat on the project’s development team. However, concerns by several other businesses and locally-elected officials stopped the larger project.