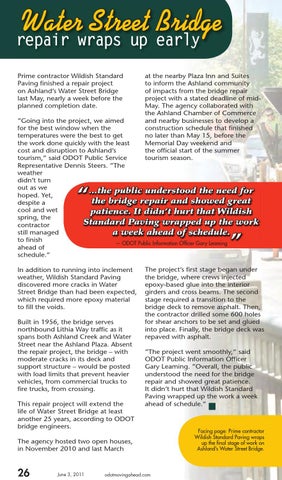 at the nearby Plaza Inn and Suites to inform the Ashland community of impacts from the bridge repair project with a stated deadline of midMay. The agency collaborated with the Ashland Chamber of Commerce and nearby businesses to develop a construction schedule that finished no later than May 15, before the Memorial Day weekend and the official start of the summer tourism season.

“Going into the project, we aimed for the best window when the temperatures were the best to get the work done quickly with the least cost and disruption to Ashland’s tourism,” said ODOT Public Service Representative Dennis Steers. “The weather didn’t turn out as we ...the public understood the need for hoped. Yet, the bridge repair and showed great despite a cool and wet patience. It didn’t hurt that Wildish spring, the Standard Paving wrapped up the work contractor still managed a week ahead of schedule. to finish — ODOT Public Information Officer Gary Leaming ahead of schedule.”

In addition to running into inclement weather, Wildish Standard Paving discovered more cracks in Water Street Bridge than had been expected, which required more epoxy material to fill the voids. Built in 1956, the bridge serves northbound Lithia Way traffic as it spans both Ashland Creek and Water Street near the Ashland Plaza. Absent the repair project, the bridge – with moderate cracks in its deck and support structure – would be posted with load limits that prevent heavier vehicles, from commercial trucks to fire trucks, from crossing. This repair project will extend the life of Water Street Bridge at least another 25 years, according to ODOT bridge engineers.

The project’s first stage began under the bridge, where crews injected epoxy-based glue into the interior girders and cross beams. The second stage required a transition to the bridge deck to remove asphalt. Then, the contractor drilled some 600 holes for shear anchors to be set and glued into place. Finally, the bridge deck was repaved with asphalt. “The project went smoothly,” said ODOT Public Information Officer Gary Leaming. “Overall, the public understood the need for the bridge repair and showed great patience. It didn’t hurt that Wildish Standard Paving wrapped up the work a week ahead of schedule.”