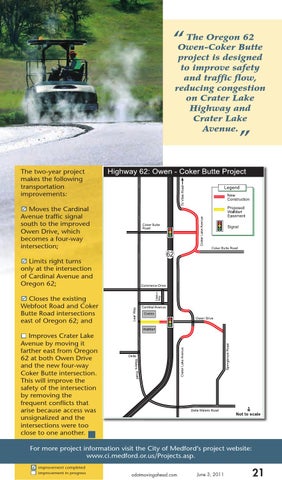 The two-year project makes the following transportation improvements:  Moves the Cardinal Avenue traffic signal south to the improved Owen Drive, which becomes a four-way intersection;  Limits right turns only at the intersection of Cardinal Avenue and Oregon 62;  Closes the existing Webfoot Road and Coker Butte Road intersections east of Oregon 62; and Improves Crater Lake Avenue by moving it farther east from Oregon 62 at both Owen Drive and the new four-way Coker Butte intersection. This will improve the safety of the intersection by removing the frequent conflicts that arise because access was unsignalized and the intersections were too close to one another. For more project information visit the City of Medford’s project website: www.ci.medford.or.us/Projects.asp.  improvement completed