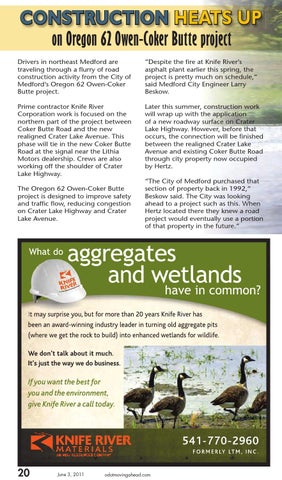 CONSTRUCTION HEATS UP Drivers in northeast Medford are traveling through a flurry of road construction activity from the City of Medford’s Oregon 62 Owen-Coker Butte project.

“Despite the fire at Knife River’s asphalt plant earlier this spring, the project is pretty much on schedule,” said Medford City Engineer Larry Beskow.

Prime contractor Knife River Corporation work is focused on the northern part of the project between Coker Butte Road and the new realigned Crater Lake Avenue. This phase will tie in the new Coker Butte Road at the signal near the Lithia Motors dealership. Crews are also working off the shoulder of Crater Lake Highway.

Later this summer, construction work will wrap up with the application of a new roadway surface on Crater Lake Highway. However, before that occurs, the connection will be finished between the realigned Crater Lake Avenue and existing Coker Butte Road through city property now occupied by Hertz.

“The City of Medford purchased that section of property back in 1992,” Beskow said. The City was looking ahead to a project such as this. When Hertz located there they knew a road project would eventually use a portion of that property in the future.”