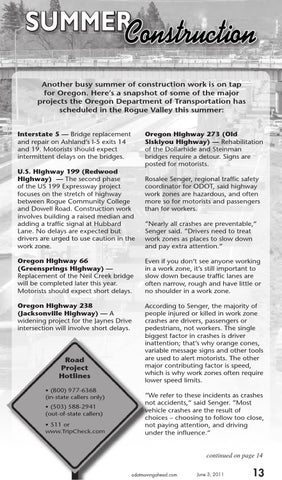 SUMMERConstruction Another busy summer of construction work is on tap for Oregon. Here’s a snapshot of some of the major projects the Oregon Department of Transportation has scheduled in the Rogue Valley this summer: Interstate 5 — Bridge replacement and repair on Ashland’s I-5 exits 14 and 19. Motorists should expect intermittent delays on the bridges.

Oregon Highway 273 (Old Siskiyou Highway) — Rehabilitation of the Dollarhide and Steinman bridges require a detour. Signs are posted for motorists.

U.S. Highway 199 (Redwood Highway) — The second phase of the US 199 Expressway project focuses on the stretch of highway between Rogue Community College and Dowell Road. Construction work involves building a raised median and adding a traffic signal at Hubbard Lane. No delays are expected but drivers are urged to use caution in the work zone.

Rosalee Senger, regional traffic safety coordinator for ODOT, said highway work zones are hazardous, and often more so for motorists and passengers than for workers. “Nearly all crashes are preventable,” Senger said. “Drivers need to treat work zones as places to slow down and pay extra attention.”

Even if you don’t see anyone working in a work zone, it’s still important to slow down because traffic lanes are often narrow, rough and have little or no shoulder in a work zone.

According to Senger, the majority of people injured or killed in work zone crashes are drivers, passengers or pedestrians, not workers. The single biggest factor in crashes is driver inattention; that’s why orange cones, variable message signs and other tools are used to alert motorists. The other major contributing factor is speed, which is why work zones often require lower speed limits.

“We refer to these incidents as crashes not accidents,” said Senger. “Most vehicle crashes are the result of choices – choosing to follow too close, not paying attention, and driving under the influence.”