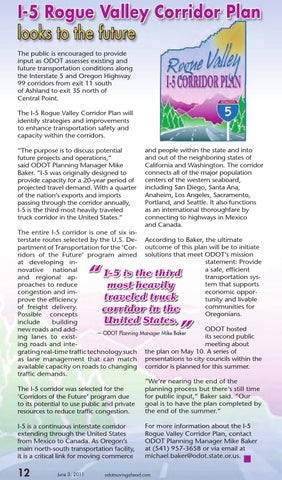 I-5 Rogue Valley Corridor Plan looks to the future The public is encouraged to provide input as ODOT assesses existing and future transportation conditions along the Interstate 5 and Oregon Highway 99 corridors from exit 11 south of Ashland to exit 35 north of Central Point. The I-5 Rogue Valley Corridor Plan will identify strategies and improvements to enhance transportation safety and capacity within the corridors. “The purpose is to discuss potential future projects and operations,” said ODOT Planning Manager Mike Baker. “I-5 was originally designed to provide capacity for a 20-year period of projected travel demand. With a quarter of the nation’s exports and imports passing through the corridor annually, I-5 is the third most heavily traveled truck corridor in the United States.”

and people within the state and into and out of the neighboring states of California and Washington. The corridor connects all of the major population centers of the western seaboard, including San Diego, Santa Ana, Anaheim, Los Angeles, Sacramento, Portland, and Seattle. It also functions as an international thoroughfare by connecting to highways in Mexico and Canada.

The entire I-5 corridor is one of six interstate routes selected by the U.S. De- According to Baker, the ultimate partment of Transportation for the ‘Cor- outcome of this plan will be to initiate ridors of the Future’ program aimed solutions that meet ODOT’s mission statement: Provide at developing ina safe, efficient novative national I-5 is the third transportation sysand regional aptem that supports proaches to reduce most heavily economic opporcongestion and imtraveled truck tunity and livable prove the efficiency communities for of freight delivery. corridor in the Oregonians. Possible concepts United States. include building ODOT hosted new roads and add— ODOT Planning Manager Mike Baker its second public ing lanes to existmeeting about ing roads and integrating real-time traffic technology such the plan on May 10. A series of as lane management that can match presentations to city councils within the available capacity on roads to changing corridor is planned for this summer. traffic demands. “We’re nearing the end of the planning process but there’s still time The I-5 corridor was selected for the for public input,” Baker said. “Our ‘Corridors of the Future’ program due goal is to have the plan completed by to its potential to use public and private the end of the summer.” resources to reduce traffic congestion.

I-5 is a continuous interstate corridor extending through the United States from Mexico to Canada. As Oregon’s main north-south transportation facility, it is a critical link for moving commerce

For more information about the I-5 Rogue Valley Corridor Plan, contact ODOT Planning Manager Mike Baker at (541) 957-3658 or via email at michael.baker@odot.state.or.us.