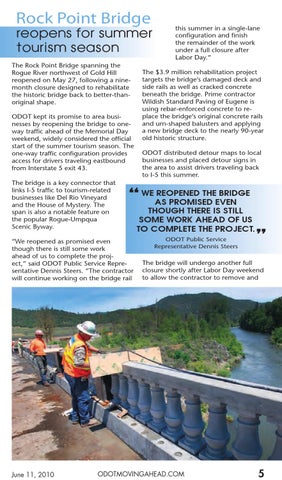 reopens for summer tourism season The Rock Point Bridge spanning the Rogue River northwest of Gold Hill reopened on May 27, following a ninemonth closure designed to rehabilitate the historic bridge back to better-thanoriginal shape.

The $3.9 million rehabilitation project targets the bridge’s damaged deck and side rails as well as cracked concrete beneath the bridge. Prime contractor Wildish Standard Paving of Eugene is using rebar-enforced concrete to replace the bridge’s original concrete rails and urn-shaped balusters and applying a new bridge deck to the nearly 90-year old historic structure.

ODOT kept its promise to area businesses by reopening the bridge to oneway traffic ahead of the Memorial Day weekend, widely considered the official start of the summer tourism season. The one-way traffic configuration provides access for drivers traveling eastbound from Interstate 5 exit 43. The bridge is a key connector that links I-5 traffic to tourism-related businesses like Del Rio Vineyard and the House of Mystery. The span is also a notable feature on the popular Rogue-Umpqua Scenic Byway.

ODOT distributed detour maps to local businesses and placed detour signs in the area to assist drivers traveling back to I-5 this summer.

“We reopened as promised even though there is still some work ahead of us to complete the project,” said ODOT Public Service Representative Dennis Steers. “The contractor will continue working on the bridge rail

this summer in a single-lane configuration and finish the remainder of the work under a full closure after Labor Day.”

WE REOPENED THE BRIDGE AS PROMISED EVEN THOUGH THERE IS STILL SOME WORK AHEAD OF US TO COMPLETE THE PROJECT. ODOT Public Service Representative Dennis Steers