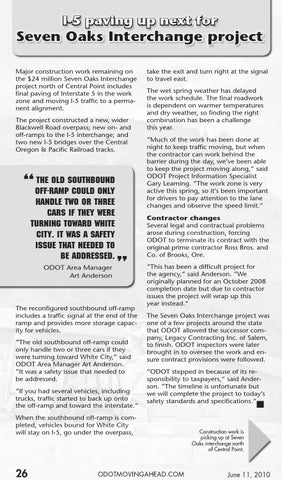 I-5 paving up next for

Seven Oaks Interchange project Major construction work remaining on the $24 million Seven Oaks Interchange project north of Central Point includes final paving of Interstate 5 in the work zone and moving I-5 traffic to a permanent alignment. The project constructed a new, wider Blackwell Road overpass; new on- and off-ramps to the I-5 interchange; and two new I-5 bridges over the Central Oregon &amp; Pacific Railroad tracks.

The old southbound “off-ramp could only handle two or three cars if they were turning toward White City. It was a safety issue that needed to be addressed. ODOT Area Manager Art Anderson

take the exit and turn right at the signal to travel east. The wet spring weather has delayed the work schedule. The final roadwork is dependent on warmer temperatures and dry weather, so finding the right combination has been a challenge this year. “Much of the work has been done at night to keep traffic moving, but when the contractor can work behind the barrier during the day, we’ve been able to keep the project moving along,” said ODOT Project Information Specialist Gary Leaming. “The work zone is very active this spring, so it’s been important for drivers to pay attention to the lane changes and observe the speed limit.”

The reconfigured southbound off-ramp includes a traffic signal at the end of the ramp and provides more storage capacity for vehicles. “The old southbound off-ramp could only handle two or three cars if they were turning toward White City,” said ODOT Area Manager Art Anderson. “It was a safety issue that needed to be addressed. “If you had several vehicles, including trucks, traffic started to back up onto the off-ramp and toward the interstate.”

Several legal and contractual problems arose during construction, forcing ODOT to terminate its contract with the original prime contractor Ross Bros. and Co. of Brooks, Ore. “This has been a difficult project for the agency,” said Anderson. “We originally planned for an October 2008 completion date but due to contractor issues the project will wrap up this year instead.” The Seven Oaks Interchange project was one of a few projects around the state that ODOT allowed the successor company, Legacy Contracting Inc. of Salem, to finish. ODOT inspectors were later brought in to oversee the work and ensure contract provisions were followed. “ODOT stepped in because of its responsibility to taxpayers,” said Anderson. “The timeline is unfortunate but we will complete the project to today’s safety standards and specifications.”

When the southbound off-ramp is completed, vehicles bound for White City will stay on I-5, go under the overpass,

Construction work is picking up at Seven Oaks interchange north of Central Point.