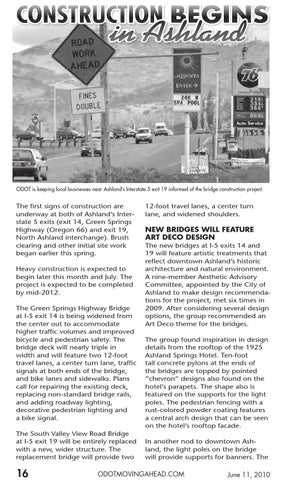 The first signs of construction are underway at both of Ashland’s Interstate 5 exits (exit 14, Green Springs Highway (Oregon 66) and exit 19, North Ashland interchange). Brush clearing and other initial site work began earlier this spring. Heavy construction is expected to begin later this month and July. The project is expected to be completed by mid-2012. The Green Springs Highway Bridge at I-5 exit 14 is being widened from the center out to accommodate higher traffic volumes and improved bicycle and pedestrian safety. The bridge deck will nearly triple in width and will feature two 12-foot travel lanes, a center turn lane, traffic signals at both ends of the bridge, and bike lanes and sidewalks. Plans call for repairing the existing deck, replacing non-standard bridge rails, and adding roadway lighting, decorative pedestrian lighting and a bike signal. The South Valley View Road Bridge at I-5 exit 19 will be entirely replaced with a new, wider structure. The replacement bridge will provide two

12-foot travel lanes, a center turn lane, and widened shoulders. NEW BRIDGES WILL FEATURE ART DECO DESIGN The new bridges at I-5 exits 14 and 19 will feature artistic treatments that reflect downtown Ashland’s historic architecture and natural environment. A nine-member Aesthetic Advisory Committee, appointed by the City of Ashland to make design recommendations for the project, met six times in 2009. After considering several design options, the group recommended an Art Deco theme for the bridges. The group found inspiration in design details from the rooftop of the 1925 Ashland Springs Hotel. Ten-foot tall concrete pylons at the ends of the bridges are topped by pointed “chevron” designs also found on the hotel’s parapets. The shape also is featured on the supports for the light poles. The pedestrian fencing with a rust-colored powder coating features a central arch design that can be seen on the hotel’s rooftop facade. In another nod to downtown Ashland, the light poles on the bridge will provide supports for banners. The