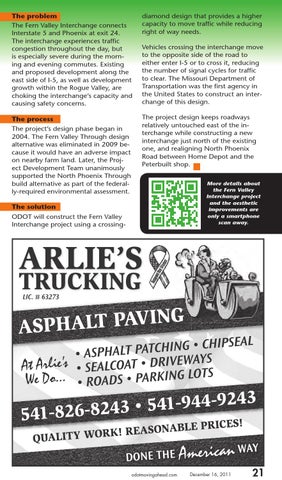 The problem The Fern Valley Interchange connects Interstate 5 and Phoenix at exit 24. The interchange experiences traffic congestion throughout the day, but is especially severe during the morning and evening commutes. Existing and proposed development along the east side of I-5, as well as development growth within the Rogue Valley, are choking the interchangeâ&amp;#x20AC;&amp;#x2122;s capacity and causing safety concerns.

diamond design that provides a higher capacity to move traffic while reducing right of way needs.

The project design keeps roadways relatively untouched east of the interchange while constructing a new interchange just north of the existing one, and realigning North Phoenix Road between Home Depot and the Peterbuilt shop.

The projectâ&amp;#x20AC;&amp;#x2122;s design phase began in 2004. The Fern Valley Through design alternative was eliminated in 2009 because it would have an adverse impact on nearby farm land. Later, the Project Development Team unanimously supported the North Phoenix Through build alternative as part of the federally-required environmental assessment.

Vehicles crossing the interchange move to the opposite side of the road to either enter I-5 or to cross it, reducing the number of signal cycles for traffic to clear. The Missouri Department of Transportation was the first agency in the United States to construct an interchange of this design.

More details about the Fern Valley Interchange project and the aesthetic improvements are only a smartphone scan away.