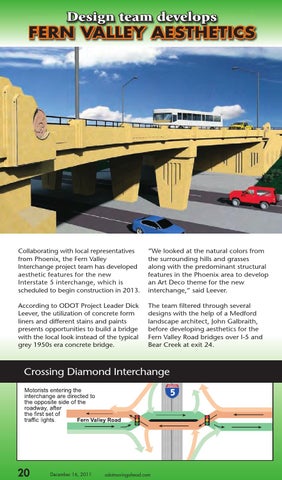 Collaborating with local representatives from Phoenix, the Fern Valley Interchange project team has developed aesthetic features for the new Interstate 5 interchange, which is scheduled to begin construction in 2013.

â&amp;#x20AC;&amp;#x153;We looked at the natural colors from the surrounding hills and grasses along with the predominant structural features in the Phoenix area to develop an Art Deco theme for the new interchange,â&amp;#x20AC;? said Leever.

According to ODOT Project Leader Dick Leever, the utilization of concrete form liners and different stains and paints presents opportunities to build a bridge with the local look instead of the typical grey 1950s era concrete bridge.

The team filtered through several designs with the help of a Medford landscape architect, John Galbraith, before developing aesthetics for the Fern Valley Road bridges over I-5 and Bear Creek at exit 24.