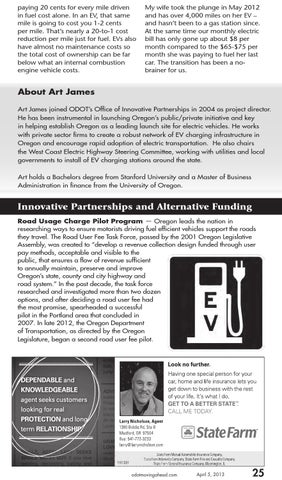 paying 20 cents for every mile driven in fuel cost alone. In an EV, that same mile is going to cost you 1-2 cents per mile. That’s nearly a 20-to-1 cost reduction per mile just for fuel. EVs also have almost no maintenance costs so the total cost of ownership can be far below what an internal combustion engine vehicle costs.

My wife took the plunge in May 2012 and has over 4,000 miles on her EV – and hasn’t been to a gas station since. At the same time our monthly electric bill has only gone up about $8 per month compared to the $65-$75 per month she was paying to fuel her last car. The transition has been a nobrainer for us.

About Art James Art James joined ODOT’s Office of Innovative Partnerships in 2004 as project director. He has been instrumental in launching Oregon’s public/private initiative and key in helping establish Oregon as a leading launch site for electric vehicles. He works with private sector firms to create a robust network of EV charging infrastructure in Oregon and encourage rapid adoption of electric transportation. He also chairs the West Coast Electric Highway Steering Committee, working with utilities and local governments to install of EV charging stations around the state. Art holds a Bachelors degree from Stanford University and a Master of Business Administration in finance from the University of Oregon.

Innovative Partnerships and Alternative Funding Road Usage Charge Pilot Program — Oregon leads the nation in researching ways to ensure motorists driving fuel efficient vehicles support the roads they travel. The Road User Fee Task Force, passed by the 2001 Oregon Legislative Assembly, was created to “develop a revenue collection design funded through user pay methods, acceptable and visible to the public, that ensures a flow of revenue sufficient to annually maintain, preserve and improve Oregon’s state, county and city highway and road system.” In the past decade, the task force researched and investigated more than two dozen options, and after deciding a road user fee had the most promise, spearheaded a successful pilot in the Portland area that concluded in 2007. In late 2012, the Oregon Department of Transportation, as directed by the Oregon Legislature, began a second road user fee pilot.