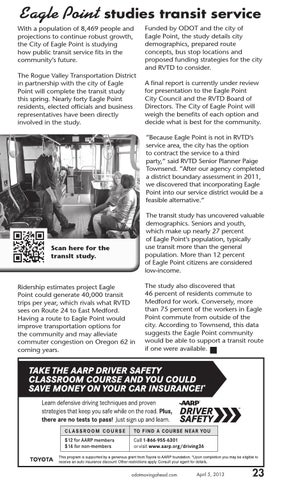 Eagle Point studies transit service With a population of 8,469 people and projections to continue robust growth, the City of Eagle Point is studying how public transit service fits in the community’s future. The Rogue Valley Transportation District in partnership with the city of Eagle Point will complete the transit study this spring. Nearly forty Eagle Point residents, elected officials and business representatives have been directly involved in the study.

Funded by ODOT and the city of Eagle Point, the study details city demographics, prepared route concepts, bus stop locations and proposed funding strategies for the city and RVTD to consider. A final report is currently under review for presentation to the Eagle Point City Council and the RVTD Board of Directors. The City of Eagle Point will weigh the benefits of each option and decide what is best for the community. “Because Eagle Point is not in RVTD’s service area, the city has the option to contract the service to a third party,” said RVTD Senior Planner Paige Townsend. “After our agency completed a district boundary assessment in 2011, we discovered that incorporating Eagle Point into our service district would be a feasible alternative.” The transit study has uncovered valuable demographics. Seniors and youth, which make up nearly 27 percent of Eagle Point’s population, typically use transit more than the general population. More than 12 percent of Eagle Point citizens are considered low-income.

Scan here for the transit study.

Ridership estimates project Eagle Point could generate 40,000 transit trips per year, which rivals what RVTD sees on Route 24 to East Medford. Having a route to Eagle Point would improve transportation options for the community and may alleviate commuter congestion on Oregon 62 in coming years.

The study also discovered that 46 percent of residents commute to Medford for work. Conversely, more than 75 percent of the workers in Eagle Point commute from outside of the city. According to Townsend, this data suggests the Eagle Point community would be able to support a transit route if one were available.