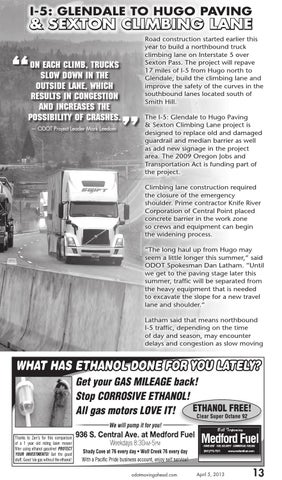 I-5: GLENDALE TO HUGO PAVING

&amp; SEXTON CLIMBING LANE Road construction started earlier this year to build a northbound truck climbing lane on Interstate 5 over Sexton Pass. The project will repave 17 miles of I-5 from Hugo north to Glendale, build the climbing lane and improve the safety of the curves in the southbound lanes located south of Smith Hill.

On each climb, trucks slow down in the outside lane, which results in congestion and increases the possibility of crashes. — ODOT Project Leader Mark Leedom

The I-5: Glendale to Hugo Paving &amp; Sexton Climbing Lane project is designed to replace old and damaged guardrail and median barrier as well as add new signage in the project area. The 2009 Oregon Jobs and Transportation Act is funding part of the project. Climbing lane construction required the closure of the emergency shoulder. Prime contractor Knife River Corporation of Central Point placed concrete barrier in the work zone so crews and equipment can begin the widening process. “The long haul up from Hugo may seem a little longer this summer,” said ODOT Spokesman Dan Latham. “Until we get to the paving stage later this summer, traffic will be separated from the heavy equipment that is needed to excavate the slope for a new travel lane and shoulder.” Latham said that means northbound I-5 traffic, depending on the time of day and season, may encounter delays and congestion as slow moving