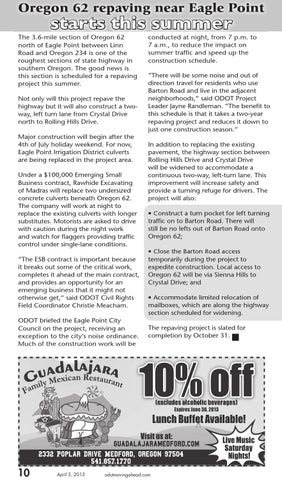 The 3.6-mile section of Oregon 62 north of Eagle Point between Linn Road and Oregon 234 is one of the roughest sections of state highway in southern Oregon. The good news is this section is scheduled for a repaving project this summer. Not only will this project repave the highway but it will also construct a twoway, left turn lane from Crystal Drive north to Rolling Hills Drive. Major construction will begin after the 4th of July holiday weekend. For now, Eagle Point Irrigation District culverts are being replaced in the project area. Under a $100,000 Emerging Small Business contract, Rawhide Excavating of Madras will replace two undersized concrete culverts beneath Oregon 62. The company will work at night to replace the existing culverts with longer substitutes. Motorists are asked to drive with caution during the night work and watch for flaggers providing traffic control under single-lane conditions. “The ESB contract is important because it breaks out some of the critical work, completes it ahead of the main contract, and provides an opportunity for an emerging business that it might not otherwise get,” said ODOT Civil Rights Field Coordinator Christie Meacham. ODOT briefed the Eagle Point City Council on the project, receiving an exception to the city’s noise ordinance. Much of the construction work will be

conducted at night, from 7 p.m. to 7 a.m., to reduce the impact on summer traffic and speed up the construction schedule. “There will be some noise and out of direction travel for residents who use Barton Road and live in the adjacent neighborhoods,” said ODOT Project Leader Jayne Randleman. “The benefit to this schedule is that it takes a two-year repaving project and reduces it down to just one construction season.” In addition to replacing the existing pavement, the highway section between Rolling Hills Drive and Crystal Drive will be widened to accommodate a continuous two-way, left-turn lane. This improvement will increase safety and provide a turning refuge for drivers. The project will also: • Construct a turn pocket for left turning traffic on to Barton Road. There will still be no lefts out of Barton Road onto Oregon 62; • Close the Barton Road access temporarily during the project to expedite construction. Local access to Oregon 62 will be via Sienna Hills to Crystal Drive; and • Accommodate limited relocation of mailboxes, which are along the highway section scheduled for widening. The repaving project is slated for completion by October 31.