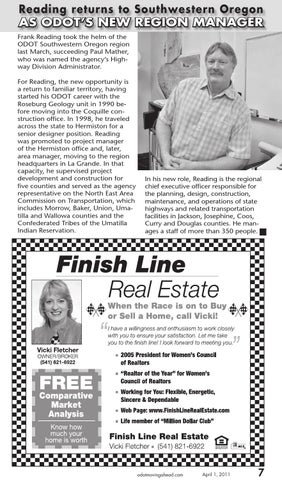 Reading returns to Southwestern Oregon AS ODOTâ&amp;#x20AC;&amp;#x2122;S NEW REGION MANAGER Frank Reading took the helm of the ODOT Southwestern Oregon region last March, succeeding Paul Mather, who was named the agencyâ&amp;#x20AC;&amp;#x2122;s Highway Division Administrator. For Reading, the new opportunity is a return to familiar territory, having started his ODOT career with the Roseburg Geology unit in 1990 before moving into the Coquille construction office. In 1998, he traveled across the state to Hermiston for a senior designer position. Reading was promoted to project manager of the Hermiston office and, later, area manager, moving to the region headquarters in La Grande. In that capacity, he supervised project development and construction for five counties and served as the agency representative on the North East Area Commission on Transportation, which includes Morrow, Baker, Union, Umatilla and Wallowa counties and the Confederated Tribes of the Umatilla Indian Reservation.

In his new role, Reading is the regional chief executive officer responsible for the planning, design, construction, maintenance, and operations of state highways and related transportation facilities in Jackson, Josephine, Coos, Curry and Douglas counties. He manages a staff of more than 350 people.