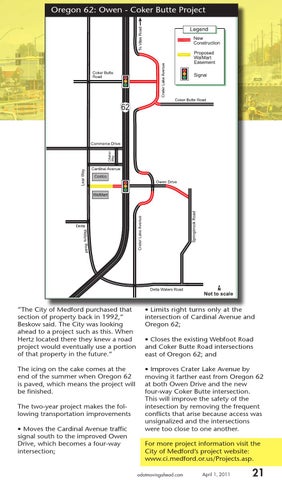 “The City of Medford purchased that section of property back in 1992,” Beskow said. The City was looking ahead to a project such as this. When Hertz located there they knew a road project would eventually use a portion of that property in the future.”

• Limits right turns only at the intersection of Cardinal Avenue and Oregon 62;

The icing on the cake comes at the end of the summer when Oregon 62 is paved, which means the project will be finished.

• Improves Crater Lake Avenue by moving it farther east from Oregon 62 at both Owen Drive and the new four-way Coker Butte intersection. This will improve the safety of the intesection by removing the frequent conflicts that arise because access was unsignalized and the intersections were too close to one another.