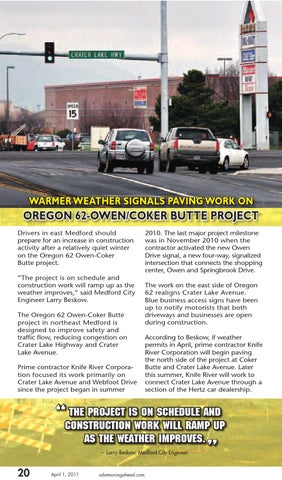 OREGON 62-OWEN/COKER BUTTE PROJECT Drivers in east Medford should prepare for an increase in construction activity after a relatively quiet winter on the Oregon 62 Owen-Coker Butte project. “The project is on schedule and construction work will ramp up as the weather improves,” said Medford City Engineer Larry Beskow. The Oregon 62 Owen-Coker Butte project in northeast Medford is designed to improve safety and traffic flow, reducing congestion on Crater Lake Highway and Crater Lake Avenue. Prime contractor Knife River Corporation focused its work primarily on Crater Lake Avenue and Webfoot Drive since the project began in summer

2010. The last major project milestone was in November 2010 when the contractor activated the new Owen Drive signal, a new four-way, signalized intersection that connects the shopping center, Owen and Springbrook Drive. The work on the east side of Oregon 62 realigns Crater Lake Avenue. Blue business access signs have been up to notify motorists that both driveways and businesses are open during construction. According to Beskow, if weather permits in April, prime contractor Knife River Corporation will begin paving the north side of the project at Coker Butte and Crater Lake Avenue. Later this summer, Knife River will work to connect Crater Lake Avenue through a section of the Hertz car dealership.

“ The project is on schedule and