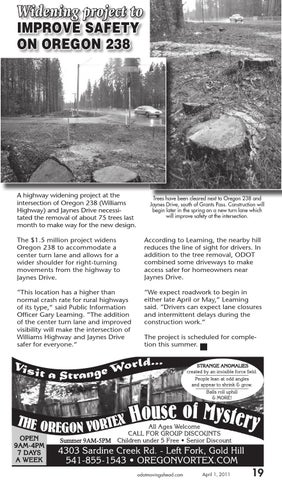 A highway widening project at the intersection of Oregon 238 (Williams Highway) and Jaynes Drive necessitated the removal of about 75 trees last month to make way for the new design.

Trees have been cleared next to Oregon 238 and Jaynes Drive, south of Grants Pass. Construction will begin later in the spring on a new turn lane which will improve safety at the intersection.

The $1.5 million project widens Oregon 238 to accommodate a center turn lane and allows for a wider shoulder for right-turning movements from the highway to Jaynes Drive.

According to Leaming, the nearby hill reduces the line of sight for drivers. In addition to the tree removal, ODOT combined some driveways to make access safer for homeowners near Jaynes Drive.

“This location has a higher than normal crash rate for rural highways of its type,” said Public Information Officer Gary Leaming. “The addition of the center turn lane and improved visibility will make the intersection of Williams Highway and Jaynes Drive safer for everyone.”

“We expect roadwork to begin in either late April or May,” Leaming said. “Drivers can expect lane closures and intermittent delays during the construction work.” The project is scheduled for completion this summer.