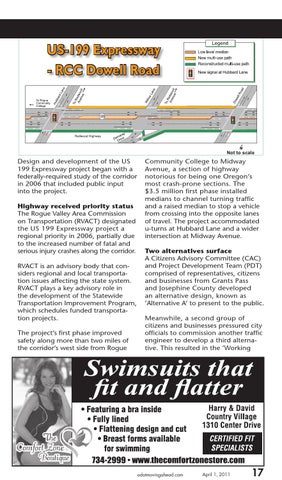 Design and development of the US 199 Expressway project began with a federally-required study of the corridor in 2006 that included public input into the project. Highway received priority status The Rogue Valley Area Commission on Transportation (RVACT) designated the US 199 Expressway project a regional priority in 2006, partially due to the increased number of fatal and serious injury crashes along the corridor. RVACT is an advisory body that considers regional and local transportation issues affecting the state system. RVACT plays a key advisory role in the development of the Statewide Transportation Improvement Program, which schedules funded transportation projects. The project’s first phase improved safety along more than two miles of the corridor’s west side from Rogue

Community College to Midway Avenue, a section of highway notorious for being one Oregon’s most crash-prone sections. The $3.5 million first phase installed medians to channel turning traffic and a raised median to stop a vehicle from crossing into the opposite lanes of travel. The project accommodated u-turns at Hubbard Lane and a wider intersection at Midway Avenue. Two alternatives surface A Citizens Advisory Committee (CAC) and Project Development Team (PDT) comprised of representatives, citizens and businesses from Grants Pass and Josephine County developed an alternative design, known as ‘Alternative A’ to present to the public. Meanwhile, a second group of citizens and businesses pressured city officials to commission another traffic engineer to develop a third alternative. This resulted in the ‘Working