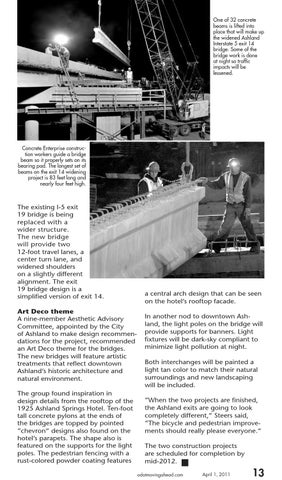 One of 32 concrete beams is lifted into place that will make up the widened Ashland Interstate 5 exit 14 bridge. Some of the bridge work is done at night so traffic impacts will be lessened.

Concrete Enterprise construction workers guide a bridge beam so it properly sets on its bearing pad. The longest set of beams on the exit 14 widening project is 83 feet long and nearly four feet high.

The existing I-5 exit 19 bridge is being replaced with a wider structure. The new bridge will provide two 12-foot travel lanes, a center turn lane, and widened shoulders on a slightly different alignment. The exit 19 bridge design is a simplified version of exit 14. Art Deco theme A nine-member Aesthetic Advisory Committee, appointed by the City of Ashland to make design recommendations for the project, recommended an Art Deco theme for the bridges. The new bridges will feature artistic treatments that reflect downtown Ashland’s historic architecture and natural environment. The group found inspiration in design details from the rooftop of the 1925 Ashland Springs Hotel. Ten-foot tall concrete pylons at the ends of the bridges are topped by pointed “chevron” designs also found on the hotel’s parapets. The shape also is featured on the supports for the light poles. The pedestrian fencing with a rust-colored powder coating features

a central arch design that can be seen on the hotel’s rooftop facade. In another nod to downtown Ashland, the light poles on the bridge will provide supports for banners. Light fixtures will be dark-sky compliant to minimize light pollution at night. Both interchanges will be painted a light tan color to match their natural surroundings and new landscaping will be included. “When the two projects are finished, the Ashland exits are going to look completely different,” Steers said, “The bicycle and pedestrian improvements should really please everyone.” The two construction projects are scheduled for completion by mid-2012. odotmovingahead.com