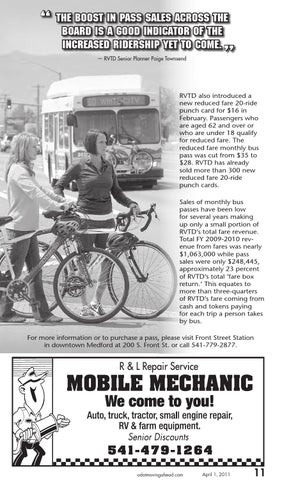 boost in pass sales across the “ Theboard is a good indicator of the increased ridership yet to come. — RVTD Senior Planner Paige Townsend

RVTD also introduced a new reduced fare 20-ride punch card for $16 in February. Passengers who are aged 62 and over or who are under 18 qualify for reduced fare. The reduced fare monthly bus pass was cut from $35 to $28. RVTD has already sold more than 300 new reduced fare 20-ride punch cards. Sales of monthly bus passes have been low for several years making up only a small portion of RVTD’s total fare revenue. Total FY 2009-2010 revenue from fares was nearly $1,063,000 while pass sales were only $248,445, approximately 23 percent of RVTD’s total ‘fare box return.’ This equates to more than three-quarters of RVTD’s fare coming from cash and tokens paying for each trip a person takes by bus. For more information or to purchase a pass, please visit Front Street Station in downtown Medford at 200 S. Front St. or call 541-779-2877.