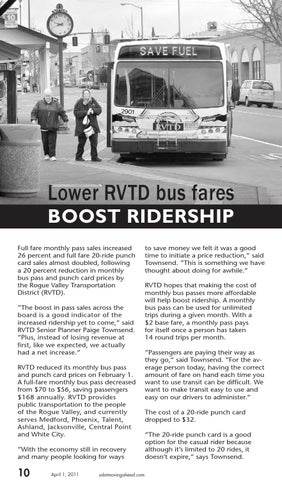 Full fare monthly pass sales increased 26 percent and full fare 20-ride punch card sales almost doubled, following a 20 percent reduction in monthly bus pass and punch card prices by the Rogue Valley Transportation District (RVTD). “The boost in pass sales across the board is a good indicator of the increased ridership yet to come,” said RVTD Senior Planner Paige Townsend. “Plus, instead of losing revenue at first, like we expected, we actually had a net increase.” RVTD reduced its monthly bus pass and punch card prices on February 1. A full-fare monthly bus pass decreased from $70 to $56, saving passengers $168 annually. RVTD provides public transportation to the people of the Rogue Valley, and currently serves Medford, Phoenix, Talent, Ashland, Jacksonville, Central Point and White City. “With the economy still in recovery and many people looking for ways

to save money we felt it was a good time to initiate a price reduction,” said Townsend. “This is something we have thought about doing for awhile.” RVTD hopes that making the cost of monthly bus passes more affordable will help boost ridership. A monthly bus pass can be used for unlimited trips during a given month. With a $2 base fare, a monthly pass pays for itself once a person has taken 14 round trips per month. “Passengers are paying their way as they go,” said Townsend. “For the average person today, having the correct amount of fare on hand each time you want to use transit can be difficult. We want to make transit easy to use and easy on our drivers to administer.” The cost of a 20-ride punch card dropped to $32. “The 20-ride punch card is a good option for the casual rider because although it’s limited to 20 rides, it doesn’t expire,” says Townsend.