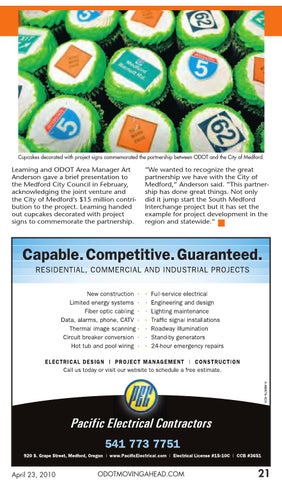 Cupcakes decorated with project signs commemorated the partnership between ODOT and the City of Medford.

Leaming and ODOT Area Manager Art Anderson gave a brief presentation to the Medford City Council in February, acknowledging the joint venture and the City of Medford’s $15 million contribution to the project. Leaming handed out cupcakes decorated with project signs to commemorate the partnership.

“We wanted to recognize the great partnership we have with the City of Medford,” Anderson said. “This partnership has done great things. Not only did it jump start the South Medford Interchange project but it has set the example for project development in the region and statewide.”