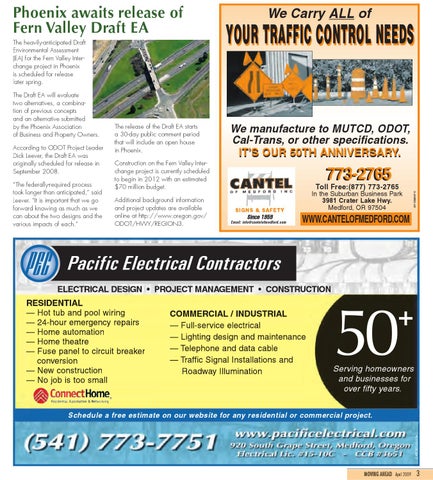 Phoenix awaits release of Fern Valley Draft EA The heavily-anticipated Draft Environmental Assessment (EA) for the Fern Valley Interchange project in Phoenix is scheduled for release later spring. The Draft EA will evaluate two alternatives, a combination of previous concepts and an alternative submitted by the Phoenix Association of Business and Property Owners. According to ODOT Project Leader Dick Leever, the Draft EA was originally scheduled for release in September 2008.

Construction on the Fern Valley Interchange project is currently scheduled to begin in 2012 with an estimated $70 million budget. Additional background information and project updates are available online at http://www.oregon.gov/ ODOT/HWY/REGION3.

We manufacture to MUTCD, ODOT, Cal-Trans, or other specifications. IT’S OUR 50TH ANNIVERSARY.

“The federally-required process took longer than anticipated,” said Leever. “It is important that we go forward knowing as much as we can about the two designs and the various impacts of each.”

The release of the Draft EA starts a 30-day public comment period that will include an open house in Phoenix.

We Carry ALL of

Serving homeowners and businesses for over fifty years.

Schedule a free estimate on our website for any residential or commercial project.