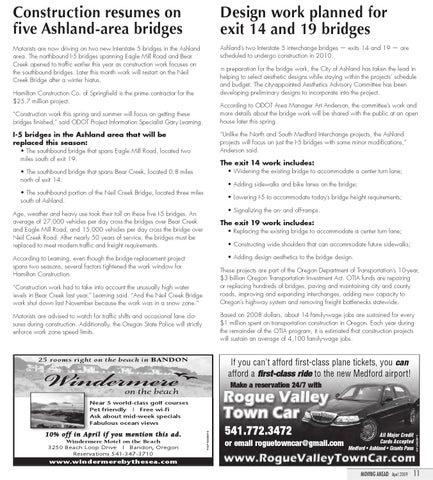 Motorists are now driving on two new Interstate 5 bridges in the Ashland area. The northbound I-5 bridges spanning Eagle Mill Road and Bear Creek opened to trafﬁc earlier this year as construction work focuses on the southbound bridges. Later this month work will restart on the Neil Creek Bridge after a winter hiatus.

Ashland’s two Interstate 5 interchange bridges — exits 14 and 19 — are scheduled to undergo construction in 2010. In preparation for the bridge work, the City of Ashland has taken the lead in helping to select aesthetic designs while staying within the projects’ schedule and budget. The city-appointed Aesthetics Advisory Committee has been developing preliminary designs to incorporate into the project.

Hamilton Construction Co. of Springﬁeld is the prime contractor for the $25.7 million project.

According to ODOT Area Manager Art Anderson, the committee’s work and more details about the bridge work will be shared with the public at an open house later this spring.

“Construction work this spring and summer will focus on getting these bridges ﬁnished,” said ODOT Project Information Specialist Gary Leaming.

I-5 bridges in the Ashland area that will be replaced this season:

“Unlike the North and South Medford Interchange projects, the Ashland projects will focus on just the I-5 bridges with some minor modiﬁcations,” Anderson said.

• Adding sidewalks and bike lanes on the bridge;

• Lowering I-5 to accommodate today’s bridge height requirements; • Signalizing the on- and off-ramps.

According to Leaming, even though the bridge replacement project spans two seasons, several factors tightened the work window for Hamilton Construction.

“Construction work had to take into account the unusually high water levels in Bear Creek last year,” Leaming said. “And the Neil Creek Bridge work shut down last November because the work was in a snow zone.”

Based on 2008 dollars, about 14 family-wage jobs are sustained for every $1 million spent on transportation construction in Oregon. Each year during the remainder of the OTIA program, it is estimated that construction projects will sustain an average of 4,100 family-wage jobs.

25 rooms right on the beach in BANDON

If you can’t afford first-class plane tickets, you can afford a first-class ride to the new Medford airport! Make a reservation 24/7 with