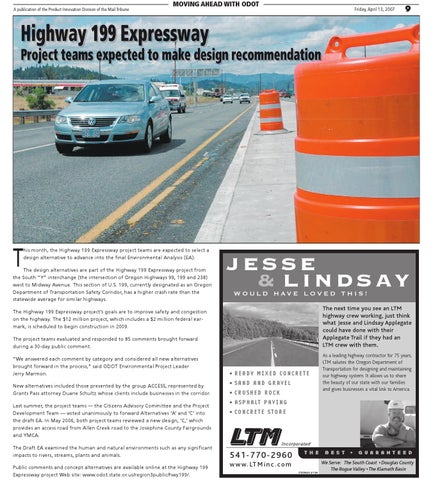 his month, the Highway 199 Expressway project teams are expected to select a design alternative to advance into the ﬁnal Environmental Analysis (EA).

The design alternatives are part of the Highway 199 Expressway project from the South “Y” interchange (the intersection of Oregon Highways 99, 199 and 238) west to Midway Avenue. This section of U.S. 199, currently designated as an Oregon Department of Transportation Safety Corridor, has a higher crash rate than the statewide average for similar highways.

The next time you see an LTM highway crew working, just think what Jesse and Lindsay Applegate could have done with their Applegate Trail if they had an LTM crew with them.

The Highway 199 Expressway project’s goals are to improve safety and congestion on the highway. The $12 million project, which includes a $2 million federal earmark, is scheduled to begin construction in 2009. The project teams evaluated and responded to 85 comments brought forward during a 30-day public comment. “We answered each comment by category and considered all new alternatives brought forward in the process,” said ODOT Environmental Project Leader Jerry Marmon. New alternatives included those presented by the group ACCESS, represented by Grants Pass attorney Duane Schultz whose clients include businesses in the corridor. Last summer, the project teams — the Citizens Advisory Committee and the Project Development Team — voted unanimously to forward Alternatives ‘A’ and ‘C’ into the draft EA. In May 2006, both project teams reviewed a new design, ‘C,’ which provides an access road from Allen Creek road to the Josephine County Fairgrounds and YMCA. The Draft EA examined the human and natural environments such as any signiﬁcant impacts to rivers, streams, plants and animals. Public comments and concept alternatives are available online at the Highway 199 Expressway project Web site: www.odot.state.or.us/region3public/hwy199/.

As a leading highway contractor for 75 years, LTM salutes the Oregon Department of Transportation for designing and maintaining our highway system. It allows us to share the beauty of our state with our families and gives businesses a vital link to America.

We Serve: The South Coast • Douglas County The Rogue Valley • The Klamath Basin