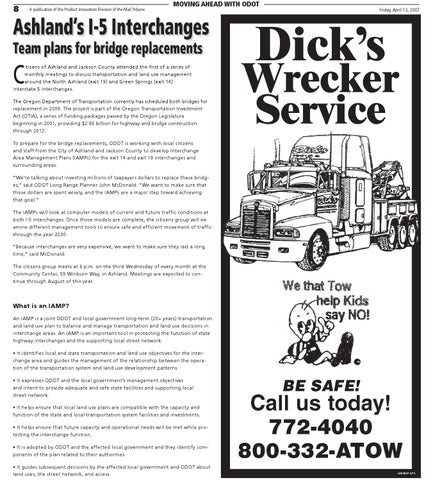 itizens of Ashland and Jackson County attended the ﬁrst of a series of monthly meetings to discuss transportation and land use management around the North Ashland (exit 19) and Green Springs (exit 14) Interstate 5 interchanges. The Oregon Department of Transportation currently has scheduled both bridges for replacement in 2009. The project is part of the Oregon Transportation Investment Act (OTIA), a series of funding packages passed by the Oregon Legislature beginning in 2001, providing $2.96 billion for highway and bridge construction through 2012.

To prepare for the bridge replacements, ODOT is working with local citizens and staff from the City of Ashland and Jackson County to develop Interchange Area Management Plans (IAMPs) for the exit 14 and exit 19 interchanges and surrounding areas. “We’re talking about investing millions of taxpayers dollars to replace these bridges,” said ODOT Long Range Planner John McDonald. “We want to make sure that those dollars are spent wisely, and the IAMPs are a major step toward achieving that goal.” The IAMPs will look at computer models of current and future trafﬁc conditions at both I-5 interchanges. Once those models are complete, the citizens group will examine different management tools to ensure safe and efﬁcient movement of trafﬁc through the year 2030. “Because interchanges are very expensive, we want to make sure they last a long time,” said McDonald. The citizens group meets at 6 p.m. on the third Wednesday of every month at the Community Center, 59 Winburn Way, in Ashland. Meetings are expected to continue through August of this year.