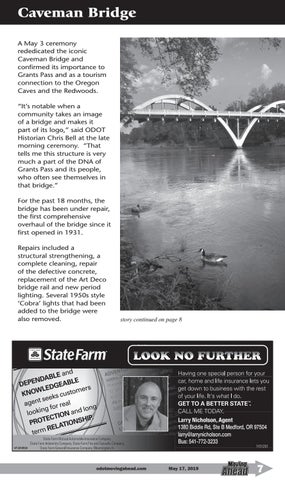 Caveman Bridge A May 3 ceremony rededicated the iconic Caveman Bridge and confirmed its importance to Grants Pass and as a tourism connection to the Oregon Caves and the Redwoods. “It’s notable when a community takes an image of a bridge and makes it part of its logo,” said ODOT Historian Chris Bell at the late morning ceremony. “That tells me this structure is very much a part of the DNA of Grants Pass and its people, who often see themselves in that bridge.” For the past 18 months, the bridge has been under repair, the first comprehensive overhaul of the bridge since it first opened in 1931. Repairs included a structural strengthening, a complete cleaning, repair of the defective concrete, replacement of the Art Deco bridge rail and new period lighting. Several 1950s style ‘Cobra’ lights that had been added to the bridge were also removed.