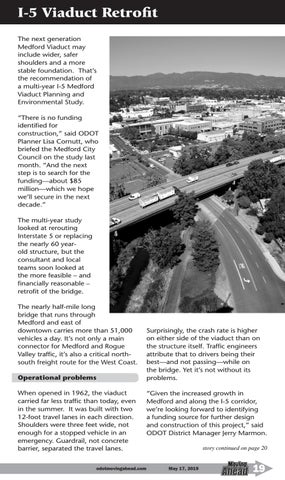 I-5 Viaduct Retrofit The next generation Medford Viaduct may include wider, safer shoulders and a more stable foundation. That’s the recommendation of a multi-year I-5 Medford Viaduct Planning and Environmental Study. “There is no funding identified for construction,” said ODOT Planner Lisa Cornutt, who briefed the Medford City Council on the study last month. “And the next step is to search for the funding—about $85 million—which we hope we’ll secure in the next decade.” The multi-year study looked at rerouting Interstate 5 or replacing the nearly 60 yearold structure, but the consultant and local teams soon looked at the more feasible – and financially reasonable – retrofit of the bridge. The nearly half-mile long bridge that runs through Medford and east of downtown carries more than 51,000 vehicles a day. It’s not only a main connector for Medford and Rogue Valley traffic, it’s also a critical northsouth freight route for the West Coast. Operational problems When opened in 1962, the viaduct carried far less traffic than today, even in the summer. It was built with two 12-foot travel lanes in each direction. Shoulders were three feet wide, not enough for a stopped vehicle in an emergency. Guardrail, not concrete barrier, separated the travel lanes.

Surprisingly, the crash rate is higher on either side of the viaduct than on the structure itself. Traffic engineers attribute that to drivers being their best—and not passing—while on the bridge. Yet it’s not without its problems. “Given the increased growth in Medford and along the I-5 corridor, we’re looking forward to identifying a funding source for further design and construction of this project,” said ODOT District Manager Jerry Marmon.