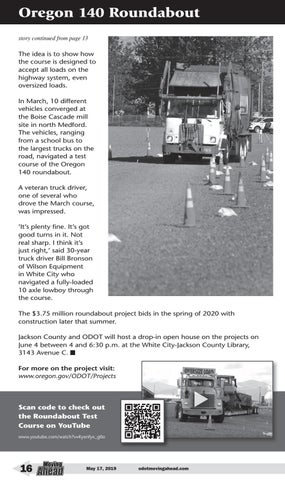 The idea is to show how the course is designed to accept all loads on the highway system, even oversized loads. In March, 10 different vehicles converged at the Boise Cascade mill site in north Medford. The vehicles, ranging from a school bus to the largest trucks on the road, navigated a test course of the Oregon 140 roundabout. A veteran truck driver, one of several who drove the March course, was impressed. ‘It’s plenty fine. It’s got good turns in it. Not real sharp. I think it’s just right,’ said 30-year truck driver Bill Bronson of Wilson Equipment in White City who navigated a fully-loaded 10 axle lowboy through the course. The $3.75 million roundabout project bids in the spring of 2020 with construction later that summer. Jackson County and ODOT will host a drop-in open house on the projects on June 4 between 4 and 6:30 p.m. at the White City-Jackson County Library, 3143 Avenue C. For more on the project visit: www.oregon.gov/ODOT/Projects

Scan code to check out the Roundabout Test Course on YouTube www.youtube.com/watch?v=Kyenfyx_g0o