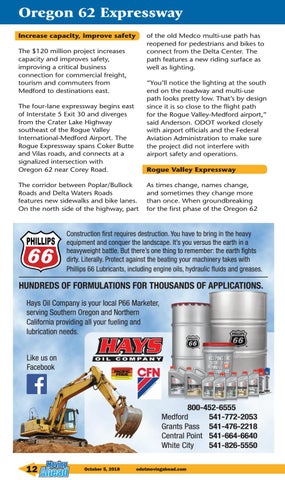 of the old Medco multi-use path has reopened for pedestrians and bikes to connect from the Delta Center. The path features a new riding surface as well as lighting.

“You’ll notice the lighting at the south end on the roadway and multi-use path looks pretty low. That’s by design since it is so close to the flight path for the Rogue Valley-Medford airport,” said Anderson. ODOT worked closely with airport officials and the Federal Aviation Administration to make sure the project did not interfere with airport safety and operations.

The four-lane expressway begins east of Interstate 5 Exit 30 and diverges from the Crater Lake Highway southeast of the Rogue Valley International-Medford Airport. The Rogue Expressway spans Coker Butte and Vilas roads, and connects at a signalized intersection with Oregon 62 near Corey Road.

The corridor between Poplar/Bullock Roads and Delta Waters Roads features new sidewalks and bike lanes. On the north side of the highway, part

As times change, names change, and sometimes they change more than once. When groundbreaking for the first phase of the Oregon 62

Construction first requires destruction. You have to bring in the heavy equipment and conquer the landscape. It’s you versus the earth in a heavyweight battle. But there’s one thing to remember: the earth fights dirty. Literally. Protect against the beating your machinery takes with Phillips 66 Lubricants, including engine oils, hydraulic fluids and greases.

HUNDREDS OF FORMULATIONS FOR THOUSANDS OF APPLICATIONS. Hays Oil Company is your local P66 Marketer, serving Southern Oregon and Northern California providing all your fueling and lubrication needs. Like us on Facebook