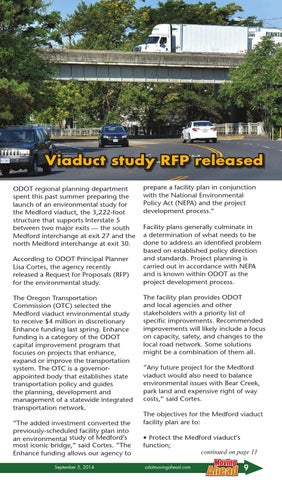 Viaduct study RFP released ODOT regional planning department spent this past summer preparing the launch of an environmental study for the Medford viaduct, the 3,222-foot structure that supports Interstate 5 between two major exits — the south Medford interchange at exit 27 and the north Medford interchange at exit 30. According to ODOT Principal Planner Lisa Cortes, the agency recently released a Request for Proposals (RFP) for the environmental study. The Oregon Transportation Commission (OTC) selected the Medford viaduct environmental study to receive $4 million in discretionary Enhance funding last spring. Enhance funding is a category of the ODOT capital improvement program that focuses on projects that enhance, expand or improve the transportation system. The OTC is a governorappointed body that establishes state transportation policy and guides the planning, development and management of a statewide integrated transportation network. “The added investment converted the previously-scheduled facility plan into an environmental study of Medford’s most iconic bridge,” said Cortes. “The Enhance funding allows our agency to September 5, 2014

prepare a facility plan in conjunction with the National Environmental Policy Act (NEPA) and the project development process.” Facility plans generally culminate in a determination of what needs to be done to address an identified problem based on established policy direction and standards. Project planning is carried out in accordance with NEPA and is known within ODOT as the project development process. The facility plan provides ODOT and local agencies and other stakeholders with a priority list of specific improvements. Recommended improvements will likely include a focus on capacity, safety, and changes to the local road network. Some solutions might be a combination of them all. “Any future project for the Medford viaduct would also need to balance environmental issues with Bear Creek, park land and expensive right of way costs,” said Cortes. The objectives for the Medford viaduct facility plan are to: • Protect the Medford viaduct’s function;