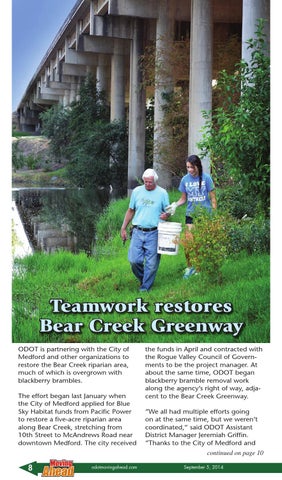 Teamwork restores Bear Creek Greenway ODOT is partnering with the City of Medford and other organizations to restore the Bear Creek riparian area, much of which is overgrown with blackberry brambles. The effort began last January when the City of Medford applied for Blue Sky Habitat funds from Pacific Power to restore a five-acre riparian area along Bear Creek, stretching from 10th Street to McAndrews Road near downtown Medford. The city received

the funds in April and contracted with the Rogue Valley Council of Governments to be the project manager. At about the same time, ODOT began blackberry bramble removal work along the agency’s right of way, adjacent to the Bear Creek Greenway. “We all had multiple efforts going on at the same time, but we weren’t coordinated,” said ODOT Assistant District Manager Jeremiah Griffin. “Thanks to the City of Medford and