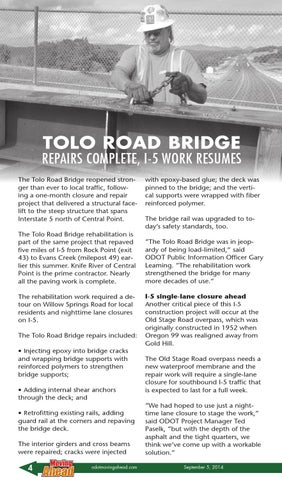 REPAIRS COMPLETE, I-5 WORK RESUMES The Tolo Road Bridge reopened stronger than ever to local traffic, following a one-month closure and repair project that delivered a structural facelift to the steep structure that spans Interstate 5 north of Central Point. The Tolo Road Bridge rehabilitation is part of the same project that repaved five miles of I-5 from Rock Point (exit 43) to Evans Creek (milepost 49) earlier this summer. Knife River of Central Point is the prime contractor. Nearly all the paving work is complete. The rehabilitation work required a detour on Willow Springs Road for local residents and nighttime lane closures on I-5. The Tolo Road Bridge repairs included: • Injecting epoxy into bridge cracks and wrapping bridge supports with reinforced polymers to strengthen bridge supports; • Adding internal shear anchors through the deck; and • Retroﬁtting existing rails, adding guard rail at the corners and repaving the bridge deck. The interior girders and cross beams were repaired; cracks were injected

with epoxy-based glue; the deck was pinned to the bridge; and the vertical supports were wrapped with fiber reinforced polymer. The bridge rail was upgraded to today’s safety standards, too. “The Tolo Road Bridge was in jeopardy of being load-limited,” said ODOT Public Information Officer Gary Leaming. “The rehabilitation work strengthened the bridge for many more decades of use.” I-5 single-lane closure ahead Another critical piece of this I-5 construction project will occur at the Old Stage Road overpass, which was originally constructed in 1952 when Oregon 99 was realigned away from Gold Hill. The Old Stage Road overpass needs a new waterproof membrane and the repair work will require a single-lane closure for southbound I-5 traffic that is expected to last for a full week. “We had hoped to use just a nighttime lane closure to stage the work,” said ODOT Project Manager Ted Paselk, “but with the depth of the asphalt and the tight quarters, we think we’ve come up with a workable solution.” September 5, 2014