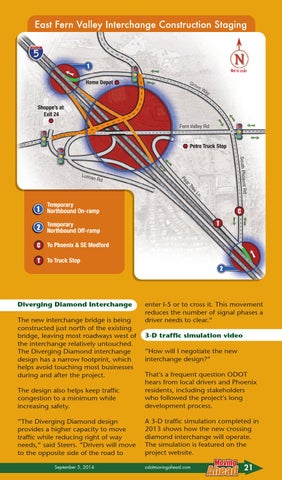 enter I-5 or to cross it. This movement reduces the number of signal phases a driver needs to clear.” 3-D traffic simulation video “How will I negotiate the new interchange design?”

The design also helps keep traffic congestion to a minimum while increasing safety.

“The Diverging Diamond design provides a higher capacity to move traffic while reducing right of way needs,” said Steers. “Drivers will move to the opposite side of the road to

A 3-D traffic simulation completed in 2013 shows how the new crossing diamond interchange will operate. The simulation is featured on the project website.