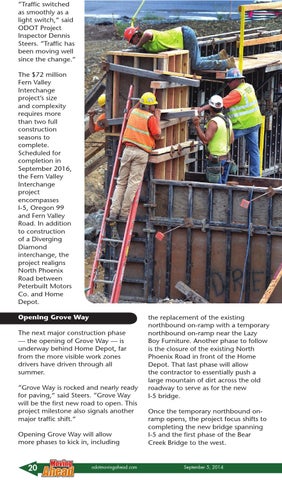 “Traffic switched as smoothly as a light switch,” said ODOT Project Inspector Dennis Steers. “Traffic has been moving well since the change.” The $72 million Fern Valley Interchange project’s size and complexity requires more than two full construction seasons to complete. Scheduled for completion in September 2016, the Fern Valley Interchange project encompasses I-5, Oregon 99 and Fern Valley Road. In addition to construction of a Diverging Diamond interchange, the project realigns North Phoenix Road between Peterbuilt Motors Co. and Home Depot. Opening Grove Way The next major construction phase — the opening of Grove Way — is underway behind Home Depot, far from the more visible work zones drivers have driven through all summer. “Grove Way is rocked and nearly ready for paving,” said Steers. “Grove Way will be the first new road to open. This project milestone also signals another major traffic shift.” Opening Grove Way will allow more phases to kick in, including

the replacement of the existing northbound on-ramp with a temporary northbound on-ramp near the Lazy Boy Furniture. Another phase to follow is the closure of the existing North Phoenix Road in front of the Home Depot. That last phase will allow the contractor to essentially push a large mountain of dirt across the old roadway to serve as for the new I-5 bridge. Once the temporary northbound onramp opens, the project focus shifts to completing the new bridge spanning I-5 and the first phase of the Bear Creek Bridge to the west.