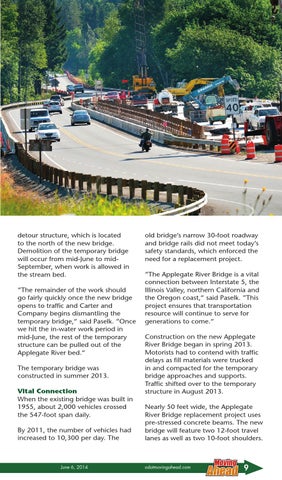 detour structure, which is located to the north of the new bridge. Demolition of the temporary bridge will occur from mid-June to midSeptember, when work is allowed in the stream bed. “The remainder of the work should go fairly quickly once the new bridge opens to traffic and Carter and Company begins dismantling the temporary bridge,” said Paselk. “Once we hit the in-water work period in mid-June, the rest of the temporary structure can be pulled out of the Applegate River bed.” The temporary bridge was constructed in summer 2013. Vital Connection When the existing bridge was built in 1955, about 2,000 vehicles crossed the 547-foot span daily. By 2011, the number of vehicles had increased to 10,300 per day. The

old bridge’s narrow 30-foot roadway and bridge rails did not meet today’s safety standards, which enforced the need for a replacement project. “The Applegate River Bridge is a vital connection between Interstate 5, the Illinois Valley, northern California and the Oregon coast,” said Paselk. “This project ensures that transportation resource will continue to serve for generations to come.” Construction on the new Applegate River Bridge began in spring 2013. Motorists had to contend with traffic delays as fill materials were trucked in and compacted for the temporary bridge approaches and supports. Traffic shifted over to the temporary structure in August 2013. Nearly 50 feet wide, the Applegate River Bridge replacement project uses pre-stressed concrete beams. The new bridge will feature two 12-foot travel lanes as well as two 10-foot shoulders.