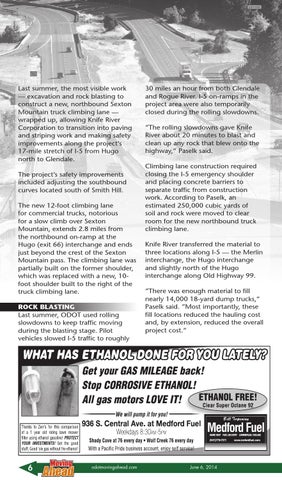 Last summer, the most visible work — excavation and rock blasting to construct a new, northbound Sexton Mountain truck climbing lane — wrapped up, allowing Knife River Corporation to transition into paving and striping work and making safety improvements along the project’s 17-mile stretch of I-5 from Hugo north to Glendale. The project’s safety improvements included adjusting the southbound curves located south of Smith Hill. The new 12-foot climbing lane for commercial trucks, notorious for a slow climb over Sexton Mountain, extends 2.8 miles from the northbound on-ramp at the Hugo (exit 66) interchange and ends just beyond the crest of the Sexton Mountain pass. The climbing lane was partially built on the former shoulder, which was replaced with a new, 10foot shoulder built to the right of the truck climbing lane. ROCK BLASTING Last summer, ODOT used rolling slowdowns to keep traffic moving during the blasting stage. Pilot vehicles slowed I-5 traffic to roughly

30 miles an hour from both Glendale and Rogue River. I-5 on-ramps in the project area were also temporarily closed during the rolling slowdowns. “The rolling slowdowns gave Knife River about 20 minutes to blast and clean up any rock that blew onto the highway,” Paselk said. Climbing lane construction required closing the I-5 emergency shoulder and placing concrete barriers to separate traffic from construction work. According to Paselk, an estimated 250,000 cubic yards of soil and rock were moved to clear room for the new northbound truck climbing lane. Knife River transferred the material to three locations along I-5 — the Merlin interchange, the Hugo interchange and slightly north of the Hugo interchange along Old Highway 99. “There was enough material to fill nearly 14,000 18-yard dump trucks,” Paselk said. “Most importantly, these fill locations reduced the hauling cost and, by extension, reduced the overall project cost.”