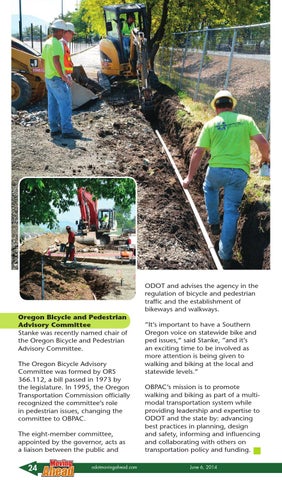 “It’s important to have a Southern Oregon voice on statewide bike and ped issues,” said Stanke, “and it’s an exciting time to be involved as more attention is being given to walking and biking at the local and statewide levels.” OBPAC’s mission is to promote walking and biking as part of a multimodal transportation system while providing leadership and expertise to ODOT and the state by: advancing best practices in planning, design and safety, informing and influencing and collaborating with others on transportation policy and funding. June 6, 2014