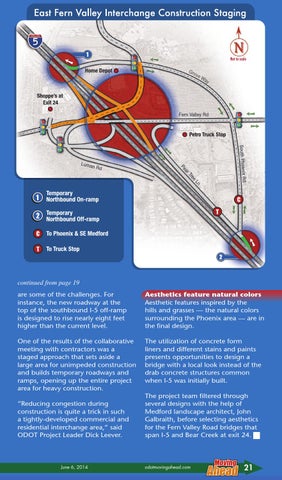 continued from page 19 are some of the challenges. For instance, the new roadway at the top of the southbound I-5 off-ramp is designed to rise nearly eight feet higher than the current level.

One of the results of the collaborative meeting with contractors was a staged approach that sets aside a large area for unimpeded construction and builds temporary roadways and ramps, opening up the entire project area for heavy construction.

The utilization of concrete form liners and different stains and paints presents opportunities to design a bridge with a local look instead of the drab concrete structures common when I-5 was initially built.

“Reducing congestion during construction is quite a trick in such a tightly-developed commercial and residential interchange area,” said ODOT Project Leader Dick Leever.

The project team filtered through several designs with the help of Medford landscape architect, John Galbraith, before selecting aesthetics for the Fern Valley Road bridges that span I-5 and Bear Creek at exit 24.