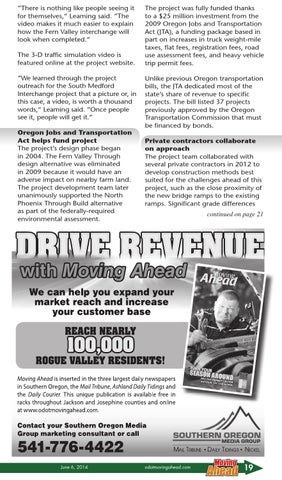 “There is nothing like people seeing it for themselves,” Leaming said. “The video makes it much easier to explain how the Fern Valley interchange will look when completed.” The 3-D traffic simulation video is featured online at the project website. “We learned through the project outreach for the South Medford Interchange project that a picture or, in this case, a video, is worth a thousand words,” Leaming said. “Once people see it, people will get it.” Oregon Jobs and Transportation Act helps fund project The project’s design phase began in 2004. The Fern Valley Through design alternative was eliminated in 2009 because it would have an adverse impact on nearby farm land. The project development team later unanimously supported the North Phoenix Through Build alternative as part of the federally-required environmental assessment.

The project was fully funded thanks to a $25 million investment from the 2009 Oregon Jobs and Transportation Act (JTA), a funding package based in part on increases in truck weight-mile taxes, flat fees, registration fees, road use assessment fees, and heavy vehicle trip permit fees. Unlike previous Oregon transportation bills, the JTA dedicated most of the state’s share of revenue to specific projects. The bill listed 37 projects previously approved by the Oregon Transportation Commission that must be financed by bonds. Private contractors collaborate on approach The project team collaborated with several private contractors in 2012 to develop construction methods best suited for the challenges ahead of this project, such as the close proximity of the new bridge ramps to the existing ramps. Significant grade differences