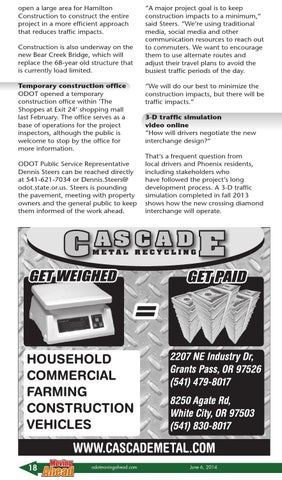 open a large area for Hamilton Construction to construct the entire project in a more efficient approach that reduces traffic impacts. Construction is also underway on the new Bear Creek Bridge, which will replace the 68-year old structure that is currently load limited. Temporary construction office ODOT opened a temporary construction office within ‘The Shoppes at Exit 24’ shopping mall last February. The office serves as a base of operations for the project inspectors, although the public is welcome to stop by the office for more information. ODOT Public Service Representative Dennis Steers can be reached directly at 541-621-7034 or Dennis.Steers@ odot.state.or.us. Steers is pounding the pavement, meeting with property owners and the general public to keep them informed of the work ahead.

“A major project goal is to keep construction impacts to a minimum,” said Steers. “We’re using traditional media, social media and other communication resources to reach out to commuters. We want to encourage them to use alternate routes and adjust their travel plans to avoid the busiest traffic periods of the day. “We will do our best to minimize the construction impacts, but there will be traffic impacts.” 3-D traffic simulation video online “How will drivers negotiate the new interchange design?” That’s a frequent question from local drivers and Phoenix residents, including stakeholders who have followed the project’s long development process. A 3-D traffic simulation completed in fall 2013 shows how the new crossing diamond interchange will operate.