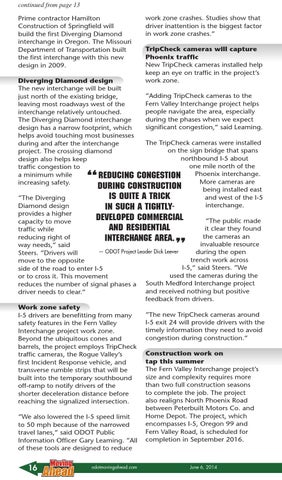 The TripCheck cameras were installed on the sign bridge that spans northbound I-5 about one mile north of the Phoenix interchange. congestion More cameras are during construction being installed east is quite a trick and west of the I-5 interchange. in such a tightly-

“The Diverging Diamond design provides a higher developed commercial “The public made capacity to move and residential it clear they found traffic while the cameras an reducing right of interchange area. invaluable resource way needs,” said — ODOT Project Leader Dick Leever during the open Steers. “Drivers will trench work across move to the opposite I-5,” said Steers. “We side of the road to enter I-5 used the cameras during the or to cross it. This movement reduces the number of signal phases a South Medford Interchange project and received nothing but positive driver needs to clear.” feedback from drivers. Work zone safety “The new TripCheck cameras around I-5 drivers are benefitting from many I-5 exit 24 will provide drivers with the safety features in the Fern Valley timely information they need to avoid Interchange project work zone. congestion during construction.” Beyond the ubiquitous cones and barrels, the project employs TripCheck Construction work on traffic cameras, the Rogue Valley’s tap this summer first Incident Response vehicle, and The Fern Valley Interchange project’s transverse rumble strips that will be size and complexity requires more built into the temporary southbound than two full construction seasons off-ramp to notify drivers of the to complete the job. The project shorter deceleration distance before also realigns North Phoenix Road reaching the signalized intersection. between Peterbuilt Motors Co. and Home Depot. The project, which “We also lowered the I-5 speed limit encompasses I-5, Oregon 99 and to 50 mph because of the narrowed Fern Valley Road, is scheduled for travel lanes,” said ODOT Public Information Officer Gary Leaming. “All completion in September 2016. of these tools are designed to reduce